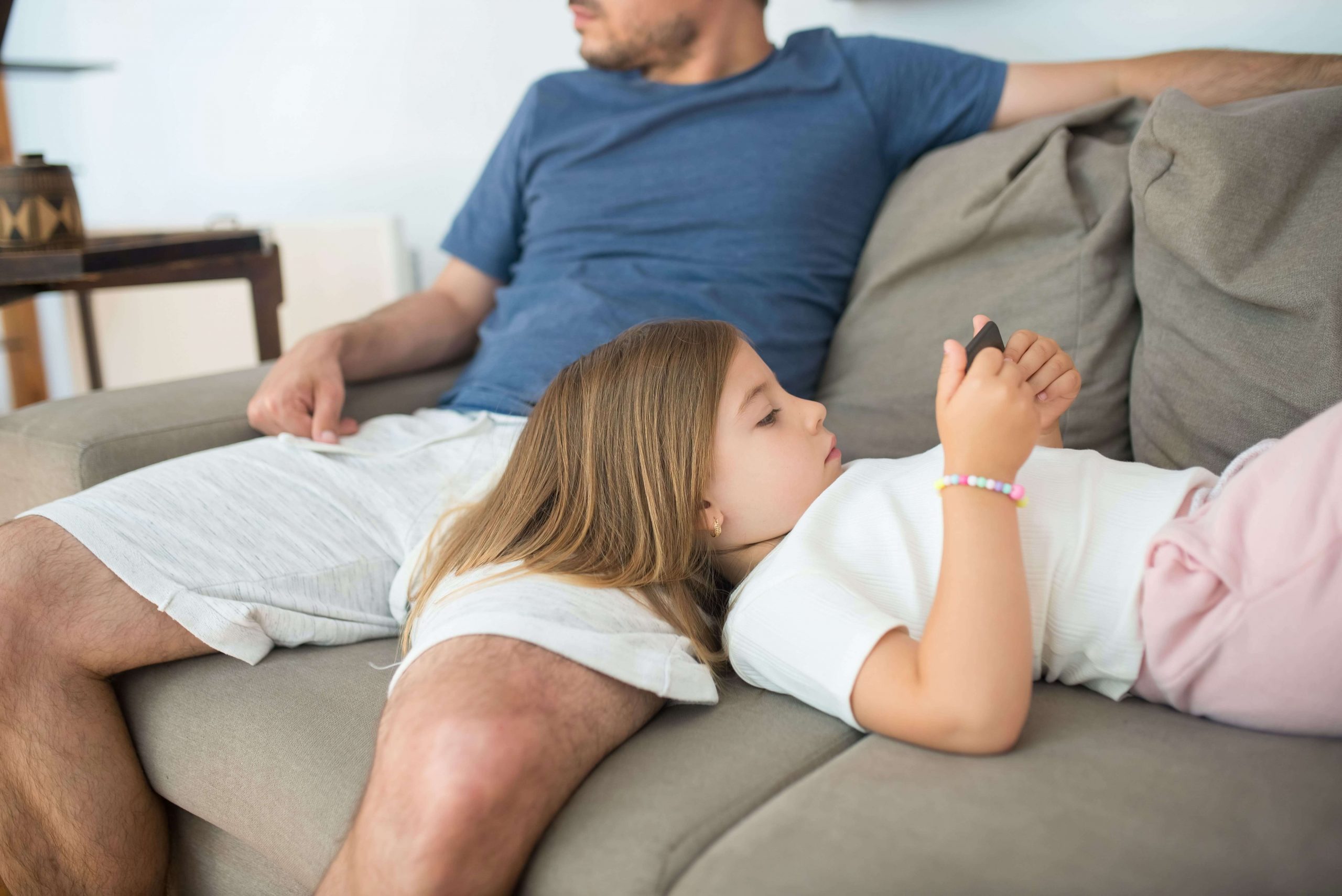 There is no magic number when it comes to a child having their first cell phone. The age they receive their first device will be determined by parental decisions, how responsible they are and the maturity of their child. When you decide to give your young kid their first cell phone, there are a few things you want to consider before purchasing one.

With today’s technology, a cell phone is no longer just a way for people to stay in touch. It has become an extension of an individual’s personality with the ability to keep up with friends and family members, schedule one’s day, and provide entertainment on demand. With most children having access to an average of four devices between their home computer and those at school, it’s the age of “bring your own device” (BYOD). And because of this new reality, kids are going to want their own phones.

Kids are a mobile-first generation. According to research from the consumer sense media, 72% of tweens owned a cell phone in 2019. While technology can be great for them, like providing connectivity and opportunities not possible before, it can also pose challenges. Keeping kids safe online has become a top priority for parents, with 84% of the parents saying internet safety is one of their greatest concerns. It’s important to keep the right balance when it comes to cell phones and parenting; learning to make smart choices with kids’ access and use of tech will set the stage for their healthy relationships with tech as they get older.

It’s never too early to instill a sense of boundaries and accountability in kids, even at the early stages of their childhood. While it’s true that most people have cell phones by age 16, they are also able to handle them responsibly by then as well.

➡ How to Keep Kids Safe Online

Any earlier than that, and you run the risk of your child being too young to handle having a phone. That’s because phones aren’t like any other toy or gadget that kids might get. They aren’t harmless; they all connect to the Internet and can reveal some pretty private information about their users if they aren’t protected. Use your best judgment. You know what your kid is like, so trust your instincts on this one!

The average age kids get a phone is between 12 and 13. In some cases, it might even be younger. But in most cases, kids will be getting a phone when they start middle school or high school.

As parents, how do you know what’s right for your child? Is he or she responsible enough to have cell phone responsibility? Or would you prefer your child to wait until they are older? Either way, read on to find out some great tips on helping your child make the best decision for their cell phone use.

So, What’s The best age to get a phone for your Kids?

There is no one right age to give your child their first smartphone, but these tips can help you make an informed decision. In my opinion kids should be allowed to have phones around the age of 14

Kids should have a cell phone when they have shown they are mature enough to handle it responsibly.

Given that all kids are different, I think the best age for getting a smartphone is when you trust them enough to handle it. The average age at which children get their first phones is 12.3 years old. But some parents may feel that this is too young. In fact, about one third of parents give their children an old phone instead of a new one.

Cell phones have enabled children to have access to a world of information, and the impact is far greater than the simple act of receiving and making phone calls. Here are just a few ways in which this technology has changed the classroom:

Students can learn while they’re waiting for their bus or on their lunch break, and they can be much more productive than they would be if left sitting in the classroom with nothing to do. The change in technology in classrooms has caused a change in the way teachers teach.

➡ How to Talk to Kids About Gun Violence

In addition to using computers and tablets, teachers are using interactive whiteboards, smart boards and other educational tools such as cell phones. These tools have changed the way students learn, and they are now more comfortable with learning in a classroom environment that includes technology.

Students are more comfortable learning in an environment where they can access information from their cell phones, which has led to many benefits for education.

A mountain of information

Children are always becoming more technology-savvy as they grow up because it gives them a competitive edge in their future careers. They can learn any language, and they can listen to foreign music, all while getting access to the world’s most popular sites.

One of the best things about cell phones for kids is that they can be used in many ways during their school day. When I was growing up, we had to go outside during recess to use our phones because there weren’t any outside phones or Wi-Fi. Cell phones have changed all that, and today’s children are able to use their phones anywhere at school and in class.

Technology has allowed students to learn in a way that doesn’t require sitting at a desk, but instead involves researching information on their cell phones whenever they get bored or stuck on an assignment.

Providing children with the opportunity to have access to technology at an early age will provide them with the knowledge, experience and confidence to explore a world of information. This can be an invaluable force for education, especially if you are teaching subjects such as math or science. The ability to research and find answers is also imperative for students who are struggling with a certain subject.

There are many benefits of giving children cell phones, including the ability to enhance their education.

While a lot of people across the country have viewed these important moments on television, many children haven’t had the opportunity. The addition of cell phones in the classroom has helped students learn about history more directly while also creating an opportunity to view important works of art. Until recently, the only way to see this content was through VHS tapes and paper prints.

While phones with internet connections will add a higher level of interactivity to the classroom, cell phones are still useful for stores of content that can be used to enhance learning experiences. Teachers have reported using cell phones as part of lesson plans in a variety of ways.

For example, students can use their phones to connect with distant experts like anthropologists at the Smithsonian or perhaps even a Nobel Prize winner. As teachers begin to rely more on technology in their classroom, they will want to consider how they can send cell phones home with students rather than relying on the internet connection in their classroom.

As students, we are used to relying on technology in our everyday lives. Smartphones and cell phones have further established themselves, especially with the millennial generation. Students have access to all types of apps, and this versatility is a great learning tool for your child. Their education doesn’t have to be confined to the four walls of their school building — it can follow them anywhere! With online language and education apps like Rosetta’s Stone and Khan Academy, you can rest assured that your child will be able to easily learn wherever they are.

While smartphones bring new educational opportunities are a plus, it doesn’t take long to find warnings regarding children and screen time.

With all of these negatives it’s important to look at the ways we monitor children’s cell phone usage.

A word of advice from Parental Daily on The best age to get a phone for your kids?

Ultimately, it’s up to each parent as to when she decides her child is ready for a cell phone. Each family has its own unique circumstance, so it may be best to address the parental decision with your child so that she understands why you’ve made this choice for her and when she might be able to use a phone again.

When it comes to giving kids cell phones at a young age, I don’t feel that it belongs in most situations. In my opinion kids should be allowed to have phones around the age of 14. That would only leave two years for them to enjoy freedom without having access to a phone. This can be detrimental to their development and overall personality because they are going through the stage of adolescence where they begin separating from the parents and learning independence.

They will want more freedom and not always want someone to check on them or see where they are when they are out in public, which is a hard thing for parents to do. The reason why some ages should be limited is because kids are going through several changes in their life. They will be rebellious and may even have trust issues with their parents because of this change in their life.

Consequentially, getting in too much trouble because they don’t have someone checking up on them would become a problem. For example; if the kid doesn’t have anyone telling them not to do something or where not to go then they may end up getting arrested for doing bad things like robbing people or stealing cars.

To summarize, there are lots of factors to consider when deciding on the best age for your children to get a phone. How dependent is your child on you? How mature is your child? Are you okay with them having a device that can distract them from doing other things like studying or reading? We believe that every situation is different and that no one solution fits every family.

What works for another family may not work for you, so it’s important to do some research and figure out what is best for your family.

If you’re reading this as a parent, hopefully we’ve been able to convince you that getting your kids a phone at an early age is a bad idea. If not, we hope that our arguments have been at least somewhat eye-opening, or at least brought some food for thought.

And if you’re reading this as a responsible teen or tween, hopefully the info in this guide has helped you decide which option is right for you.

Remember that safety needs to be your top priority, and there are ways to stay connected and keep in touch with friends through free services like texting and social media.