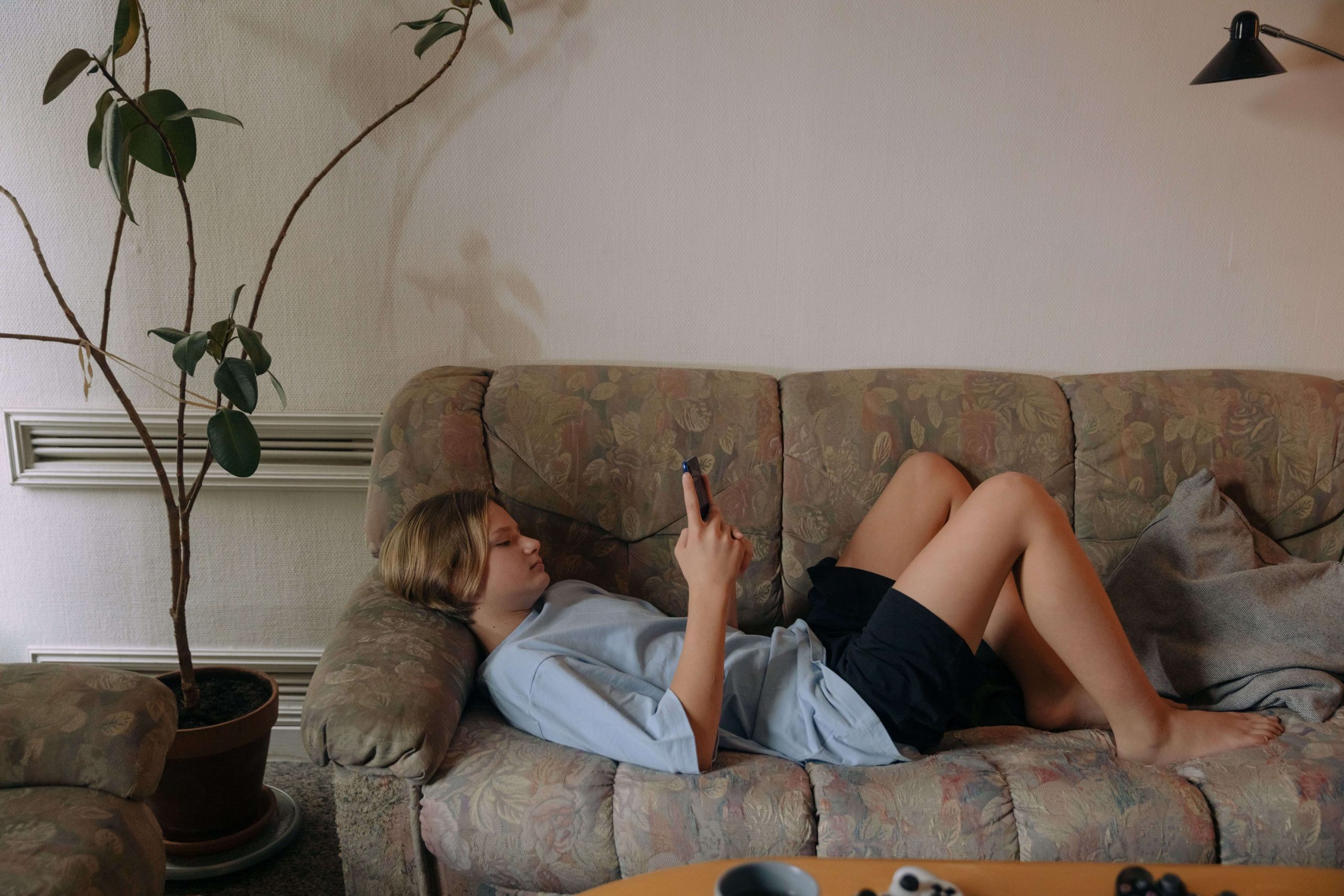 The use of cell phones by young people has created some serious problems for parents. Most teens are digitally-savvy, as well as on the go. Their phones become their constant companions. There is no bigger challenge when it comes to modern parenting than being able to set and enforce cell phone rules for teens. Follow these guidelines to help your teens live a more balanced life.

Cell phones can be a bit of a mystery for a lot of teens. Before you know it your kid will be asking to get their own phone and use it however they please. Cell phone use is a hot topic among parents, but what are the facts? How much time should we allow our kids to spend on their cell phones? What kinds of rules should we set for our kids?

According to “Cell Phone Safety Tips for Kids,” an article published by center4research.org, that specializes in Internet safety for children, cell phones can cause numerous health problems for kids . And with the teen years being critical to a young person’s development and overall well-being, it is important that parents realize how essential proper cell phone use is.

➡ How to Talk to Kids About Gun Violence

In a way, cell phones are to teens what cars were to Baby Boomers — a rite of passage. Cell phones allow us to stay connected to friends, loved ones and school. Teens need their phones for texting, calling and social media. But how much is too much? What cues will help you know your son or daughter should put down the phone?These are the questions I’ll address in this post.

These are the 8 best Cell Phone Rules for Teens Phone Usage:

Teens today have a lot thrown at them. There is much to manage: school, friends, physical well-being, extra-curricular activities, family life — and of course, your expectations for their cell phone use. To help you do this effectively, it helps to establish clear guidelines and rules surrounding your teen’s cell phone use.

One of the most challenging parts of being a parent is having to deal with your teenagers’ tech-related tantrums. Cell phone use, while a privilege, can be a detriment or even dangerous during certain situations. Here are some outline of the rules to follow when dealing with teens and their cell phones.

Take several minutes and come up with your own personal cellphone rules for your teen. For example, you might want to set a limit on the number of times they can call or text their friends each day.

1. No Cell Phone Use Before School

The first thing on the morning agenda for most teens isn’t school or breakfast…it’s the cell phone. Teens can be glued to their phones – whether it’s texting, playing games or watching funny cat videos. Knowing when to say no and when to say yes is an important lesson for all parents.

For most teens, their cell phone is like a best friend. They use it all the time, for everything from checking school email, to Instagramming selfies. However, if your teen is always on their phone but never seems to get anything done – or at least nothing they planned to do – then they might be suffering from technology overload.

➡ Negative Effects of Too Much Cell Phone Use

➡ What Age Should Kids Get a Phone?

The constant stream of information that plays on phones and computers combined with using them as a way of finding out what other people are doing, can make your own child feel kind of left out.

A few things can help you enforce these rules. First, set a morning schedule that works for you and your teen (e.g., “I want you to be dressed, fed and in the car by 6:15 AM”). Next, set a consequence if your teen fails to obey the house phone rules. As a parent, I would enforce cell phone house rules with some sort of suspension or penalty at first, and then back off from there as the teen improves.

2. Make sure your teen’s number is on speed dial.

There are quite a few simple rules that teens need to follow when it comes to cell phones. It’s important to follow these rules if you want to hold on to a good reputation, and it’s also the law. One of the simplest rules is to make sure your number is on speed dial.

As the parent of a teen, you know what it’s like to be looking for your child when they’re out on their own. Whether it’s a new town or just at the mall for some last-minute Christmas shopping, teens need to be able to reach their parents in case of emergencies. Many parents are reluctant to put work or cell phone numbers on their speed dials, but teens need that safety net when traveling or if something goes wrong.

3. Don’t text and drive, or send a text message and then drive.

We all know that texting while driving is dangerous, but often teens think it’s okay to do while driving “just a little bit.” It’s never okay. Don’t just tell your teen to put away their phone while they’re behind the wheel — help them problem-solve strategies they can use if they are tempted to pick up the phone. One effective strategy is to turn off your phone while you’re driving. That way, it’s not in reach if you need it right away.

The National Highway Traffic Safety Administration found that the use of cell phones while driving leads to an increase in fatal car accidents. Distracted driving is responsible for more than 3,142 lives in 2020. To make matters worse, distractions from texting (such as posting information on social networks) are far more likely to cause an accident than talking or hearing music. Despite the obvious risks involved, distracted driving continues to be a major problem among American teens.

Today, cell phones are not only used to communicate with family members and friends but also used by high school students during the school day. Texting has the potential to distract teens from important educational activities, such as completing homework assignments or listening in class. Cell phone rules for teens should include limitations on the use of cell phones for text messaging during school hours.

Schools usually have rules about student use of cellphones. This makes sense because teenagers don’t need to spend their school time texting friends. To make sure your child abides by school policy, set cell phone guidelines for your teen. Make it clear that he or she will face consequences for violating the school’s rules, such as detention or loss of digital privileges.

Any school – public, private, or charter – is allowed to create its own cellphone policy. These rules can vary widely depending on the school’s goals and overall end-goal. In some schools, for example, teachers and administrators want to use cellphones as an educational enhancement tool – maybe it allows students to ask questions about the lesson or share interesting things they find online in real time.

Other schools want to ban cell phone usage in school at all times to ensure that all students are highly focused on learning and not distracted by apps, texts, Tweets, and other digital diversions.

5. Respect others’ privacy when they are speaking on the phone.

When you see other people on the cell phone, please try to avoid interrupting their conversations. Even if they look like they are arguing, or having what appears to be a heated discussion; there is no need for you to interrupt this private conversation.

6. No Cell Phones While Eating

Family dinners are an important aspect of being a family, and they should not be interrupted. No one should be excused from the dinner table just to use their smart phone. Teach your children proper cell phone etiquette by not allowing any use of cell phones at the dinner table.

If you’re like me, then you don’t allow anyone to use their phone during meals. If a little voice in your head starts arguing with you that you can still be on your phone and talk to people while you enjoy your meal (I mean, it’s not like they’re hitting their teenage years), then it’s time to shove those thoughts out of your head. Let go of the need to stay connected so tightly and sit down to enjoy a great meal with your family.

7 No Cell Phones in Bedrooms

Sexting amongst teens is alarmingly popular, but it rarely ends well. The majority of teenagers who sext receive nude or nearly-nude images in return. It’s no surprise that this often leads to feelings of inadequacy, depression and low self-esteem in young people.

➡ Why Is Sexting a Problem for Teens?

➡ How to Keep Kids Safe Online

Parents have found that they need to implement strict policy on cell phones if they want to prevent these negative behaviors. There are many parents who would love to lay down the law, but they aren’t sure exactly how they should enforce their new “no cell phone in the bedroom” rule.

8. No Cell Phones During Family Time

It’s a simple concept, really. Your family members are there for a reason — to connect with each other. Key to that is actually talking to each other. After all, how can you bond with relatives when you’re too busy playing Words With Friends to say hello? The same rule applies when playing games of catch in the backyard. It’s simple, really: No cell phones during family time and especially no texting during playtime!

Having a cell phone gives teens greater access to information and entertainment, but they need to learn how to use them safely!

A good cell phone etiquette for teens is important for parents. Parents can set up rules about cell phones and the Internet to help their teens grow into responsible adults. It’s wise not to make the rules too strict or the teen may just rebel. It’s best to encourage your teens to think about courtesy and respect when using a telephone.

One of the best ways to teach them about respecting others is by deciding on common-sense rules and enforcing them. If you have family members who are “phone addicts”, you will be glad you have these rules in place when your children move out on their own.